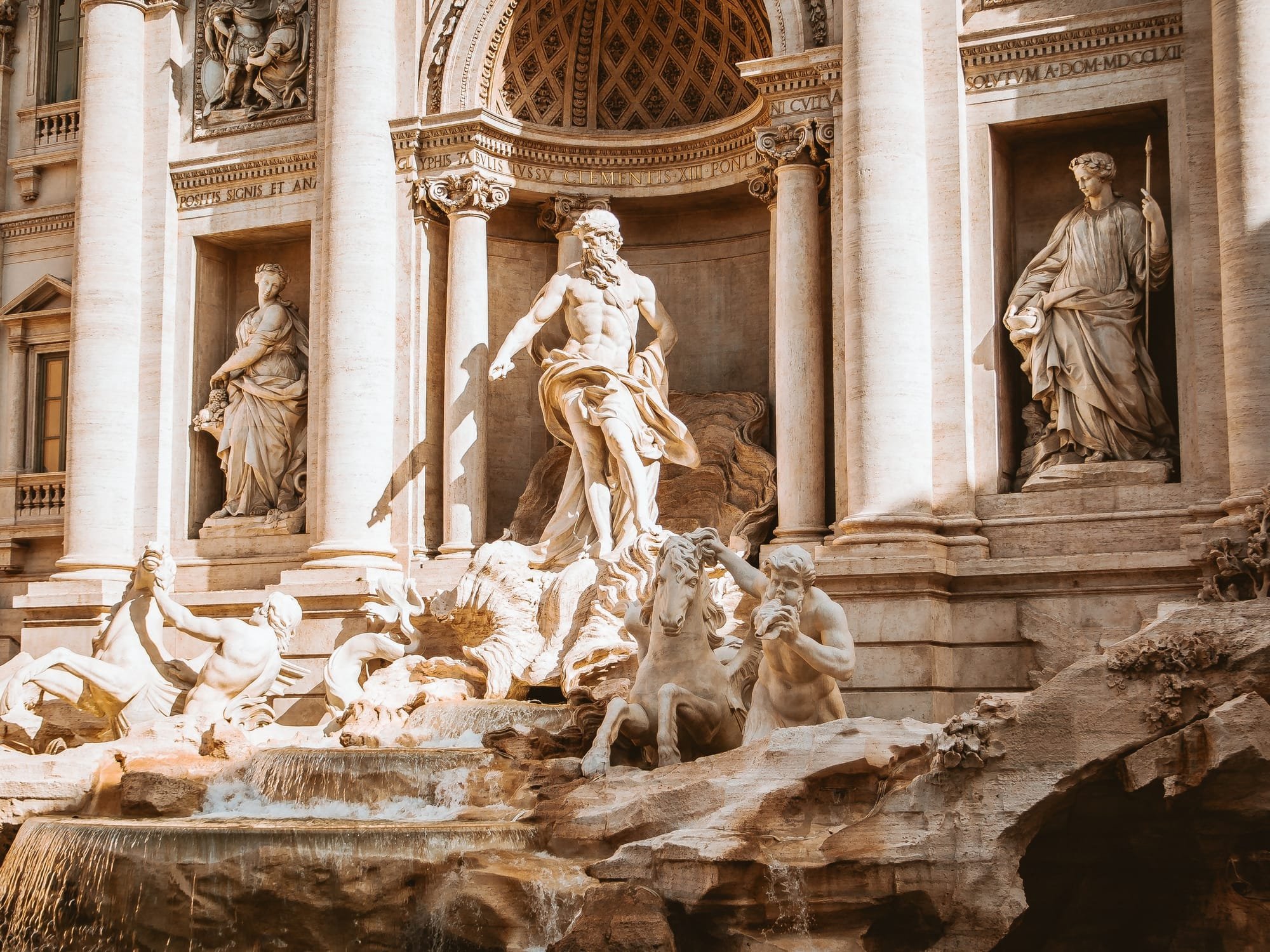 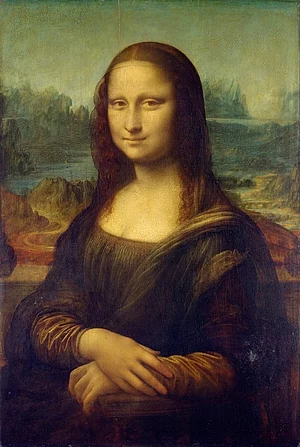 The Mona Lisa is a half-length portrait painting by Italian artist Leonardo da Vinci. It is an oil painting on a poplar wood panel. It is Considered a masterpiece of the Italian Renaissance and probably the world’s most famous painting. It was painted sometime between 1503 and 1519, when Leonardo was living in Florence.

The painting is in the three-quarter view, in which the sitter’s position mostly turns toward the viewer. It broke from the standard profile pose used in Italian art at that time and quickly became the convention for all portraits. The sitter’s mysterious smile and her unproven identity have made the painting a source of ongoing investigation and fascination.

The sitter’s identity has still not been definitively proven. There are three major theories of her identity. First one is that she is Lisa del Giocondo, the wife of the Florentine merchant Francesco di Bartolomeo del Giocondo. Second theory is that the model may have been Leonardo’s mother, Caterina. A third suggestion is that the painting is Leonardo’s self-portrait, given the resemblance between the sitter’s and the artist’s facial features. Some scholars suggested that disguising himself as a woman was the artist’s riddle.

French King Francis I, in whose court Leonardo spent the last years of his life, acquired the work after the artist’s death, and it became part of the royal collection. It now hangs in the Louvre Museum in Paris. 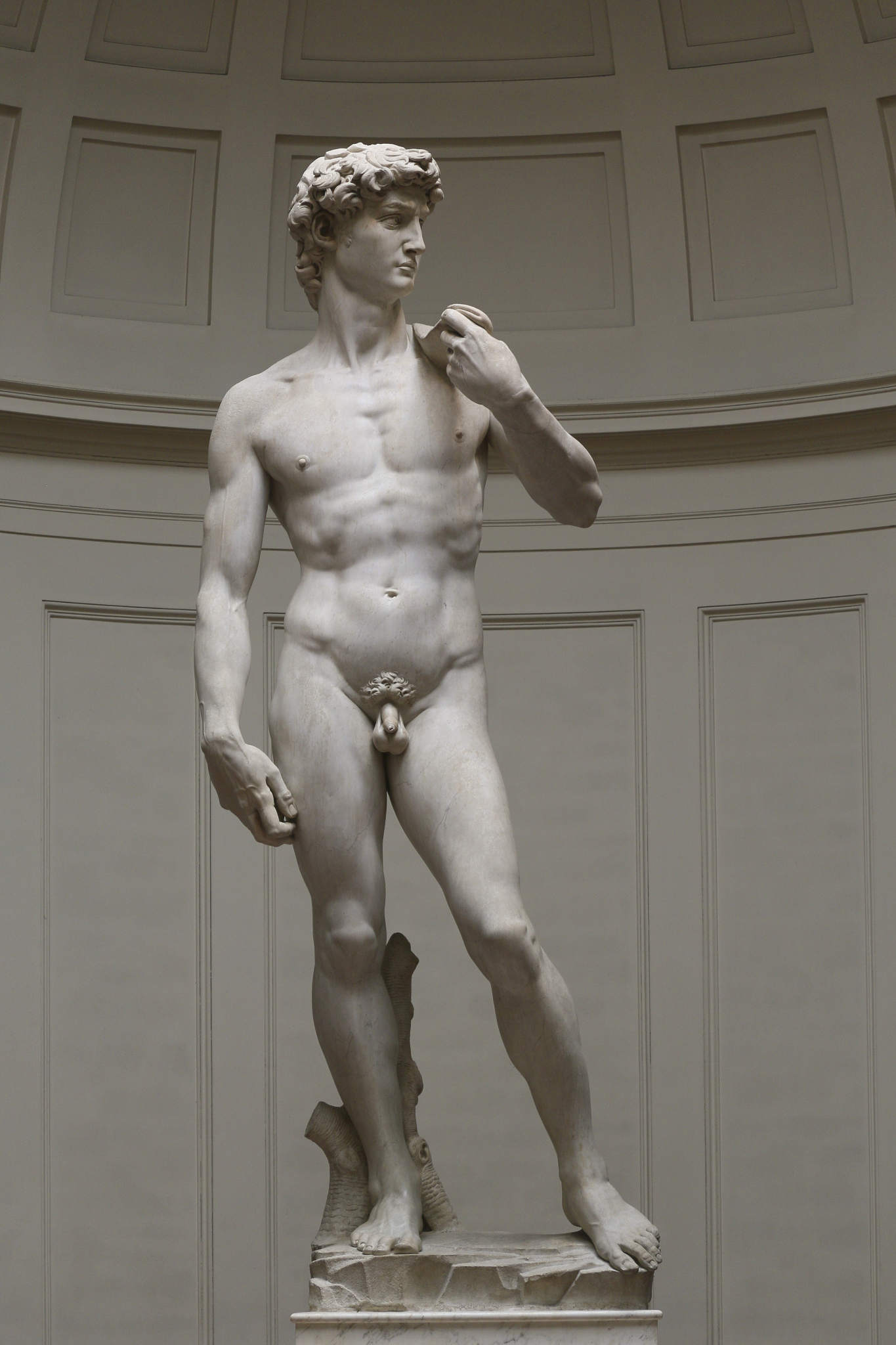 The David is a masterpiece of Renaissance sculpture, created in marble between 1501 and1504 by the Italian artist Michelangelo. It is a 5.17-metre marble statue of the Biblical figure David, and it is currently in the Accademia Gallery of Florence.

Michelangelo Buonarroti was in his early twenties when he was commissioned to create a statue representing the biblical hero of David. He was offered a block of marble which had been previously worked on by two other artists. Both artists had abandoned their work after noticing imperfections in the marble's grain, but despite these flaws, Michelangelo took up the challenge of carving the figure. The finished statue was popularly known as 'The Giant' and quickly became a symbol of liberty for the Florentine people.

Traditionally, David was portrayed after his victory, triumphant over Goliath. But Michelangelo breaks away from the traditional way of representing David. He does not present us with the giant's head at David’s feet and the powerful sword in his hand. The David strikes a simple pose, supporting his body with the right leg and carrying the left leg forward. He lets his righthand fall to the thigh level as he bends the other hand to shoulder height. His face is bold and thoughtful. This sculpture transmits drama through its eyes with a body full of tension. The mark of its tendons, muscles and veins do not have violent gestures. Those are the elements that we can also see in other Michelangelo’s works.

Für Elise (For Elise) or Bagatelle No. 25 in A minor is one of Ludwig van Beethoven's most popular compositions. It was not published during his lifetime, but 40 years after his death when it was discovered by Ludwig Nohl.

Looking at the structural "Für Elise" piano chords and notes we can see a very linear melody. The overall melodic and rhythmic patterns are relatively stable. In this musical piece Beethoven chose to keep repeating the same unchanged passage. There could be many reasons for this, and one might be that this allows him to enhance different composition sections' contrasting effect.

The identity of "Elise" in this composition is unknown. Researchers have suggested Therese Malfatti, Elisabeth Röckel, or Elise Barensfeld. It could be that the title was incorrectly transcribed and that the original work may have been named "Für Therese", after  Therese Malfatti. She was a friend and student of Beethoven's to whom he supposedly proposed in 1810, but she turned him down to marry the Austrian nobleman. There is also evidence that the piece was written for the 17-year-old German soprano singer Elisabeth Röckel who played Florestan in the 1806 revival of Beethoven's opera Fidelio.  A parish priest used to call her Elise. She has been a friend of Beethoven's since 1808, and he  perhaps wanted to marry her, too. It is also suggested that this composition is dedicated to Elise Barensfeld. She first travelled on concert tours with Beethoven's friend. It’s thought that Beethoven dedicated this work to her as a favour to Therese Malfatti who lived opposite Barensfeld's residence, and it is possible that Therese has given Elise piano lessons. 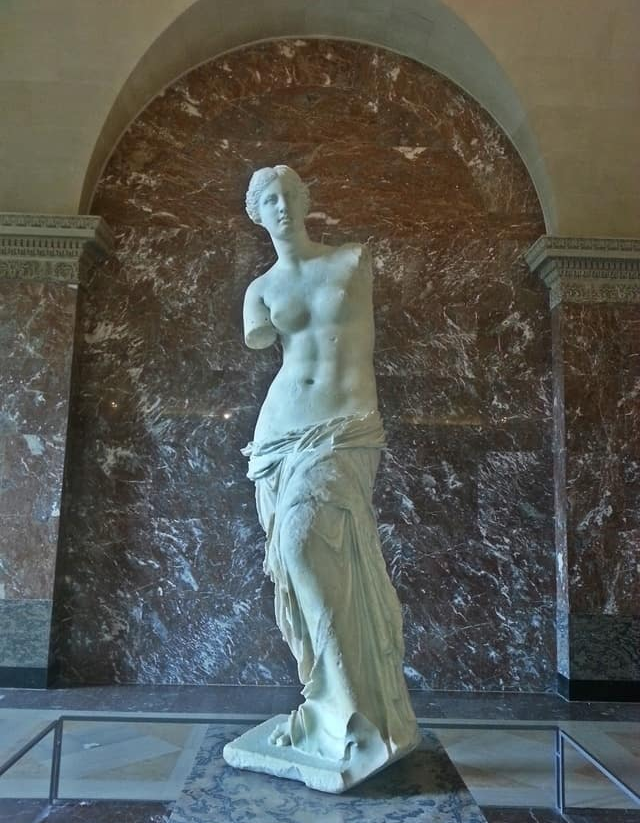 The Venus de Milo is a statue from the Hellenistic period. It is one of the most famous works of ancient Greek sculpture. The Venus de Milo has been displayed at the Louvre Museum in Paris since the statue was rediscovered on the island of Milos in Greece in 1820.

Venus was sculpted sometime between 150 and 125 BC. It was originally believed it was made by the sculptor Praxiteles, but, based on an inscription on its pedestal, the statue is now agreed to be the work of Alexandros of Antioch.

Venus is made of Parian marble and it is 204 cm high. The statue is missing both arms, but the posture of Venus de Milo suggests that she may have been hand spinning. The sculpture is depicting a Greek goddess. Many depictions of Greek gods and goddesses contain clues to their identity in the form of attributes (objects or natural elements) held in their hands. But, because of this sculpture’s lack of arms, it is hard to identify the portrayed goddess.

The statue is believed to represent Venus, the Roman counterpart of Aphrodite, because she is usually depicted half-clothed with a bare torso. Next to the statue, there was also found a handholding an apple (an attribute of Aphrodite) carved from the same Parian marble. Some people think that the sculpture actually represents the sea-goddess Amphitrite, since she was worshiped on Milos. 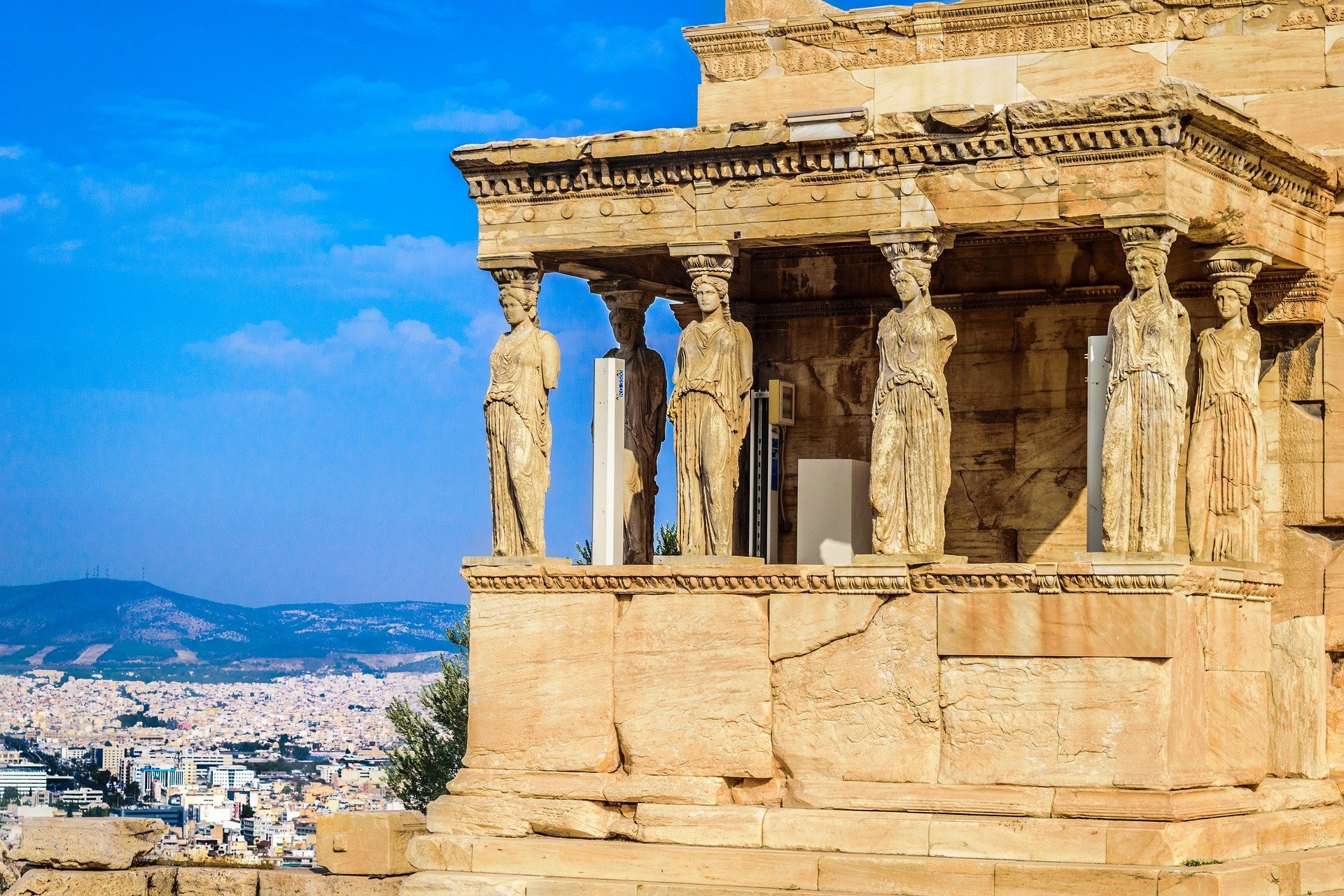 Archaeology helps all of us understand who we are what is archaeology. Archaeology is understanding the past anything that happened the day before yesterday and going all the way back to the beginning of human history through the physical remains that people have left behind if I want to go about becoming an archaeologist how do I do that first of all try to go on an excavation and find out whether archaeology is really for you the best way to do this is if you are in the United States call the local Historical Society or a nearby university and find an excavation in the vicinity there is no state in the country where archaeology isn't happening all archaeology is good you don't have to spend a lot of money to travel far away but if you want to you can excavations around the world have X digs where they take volunteers find excavations and see which take volunteers when they are in the field how much it costs you don't need any experience to go and you can in many cases even be a high school student and be engaged in an excavation you can be a retired person and engage in an excavation I have had people from the ages of 12 to 70 on my excavations and all have been great good luck I'm curious why is archaeology important in today's world and how is it relevant to today the past isn't gone not to anybody the past is part of our understanding of where we stand in the world so there are political groups religious groups cultural groups who want to use the past and its material remains to help them justify or identify or understand themselves better but mostly archaeology is still relevant to everybody because anybody who has saved an item from their own past picked up a token of a culture from long ago and held it in their hands has connected in one fell swoop with the reality of people who came before us and that power still counts inside us for so much archeology is the way we recover those remains we explain those remains and webring those remains to everybody so I know that near eastern archaeology and Biblical Archaeology are different I was wondering if you can sort of explain those differences and maybe tell us about any any the interaction between your you're experiencing that academia and maybe proponents of Biblical Archaeology what that's been like trying to navigate those defenses that's a great question i have worked in Israel since 1973 but I'm not a biblical archaeologist i first came to Israel from the worlds of classical archaeology studying Greece and Rome this was a region that was part of those worlds and it was only halfway through my experiences in Israel that it really became clear how many people who work here study this region from a completely different point of view the point of view of the relationship of this region with the biblical stories that were written about this place people who are interested in Biblical Archaeology are just as interested in archaeology as Near Eastern archaeologists that is to say they're interested in the material remains but they're interested for a different reason the biblical stories are still very powerful and meaningful and it is those stories that makes the material remains matter to a biblical archaeologist they don't matter on their own they matter because of how they relate to illustrate in form and for some verify or refute the stories that are still so powerful a Near Eastern archaeologist looks at the biblical stories as a set of documents that were written in a certain time in place like kings lists and other sorts of written remains not as the reason to study a place but as something that was produced in that place and for a Near Eastern archaeologists or a classical archaeologists like me it's the rhythms the pressures the changes of that place through history over time the collision of cultures the evolution of society the intersection of different peoples and their politics that makes this place worth studying so in your eastern archaeologists comes at it from a different point of view than a biblical archaeologist but both biblical archaeologists and Near Eastern archaeologists care about the past and think that the material remains of that past have something to tell us. 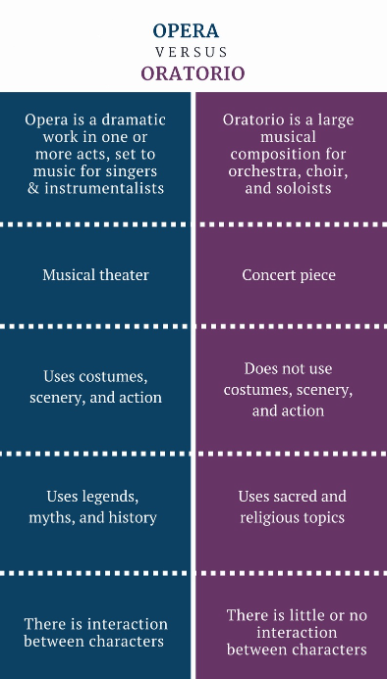