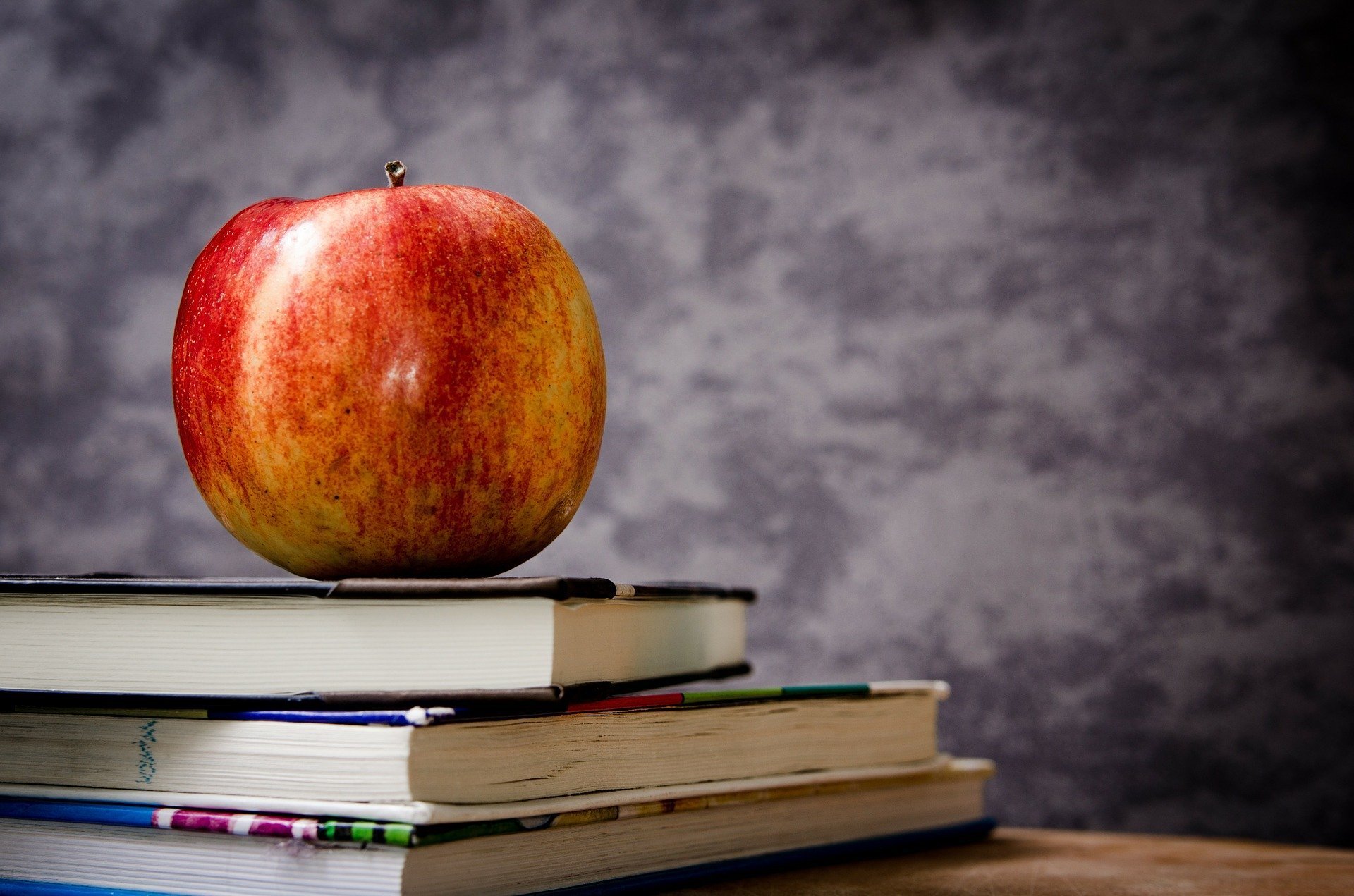 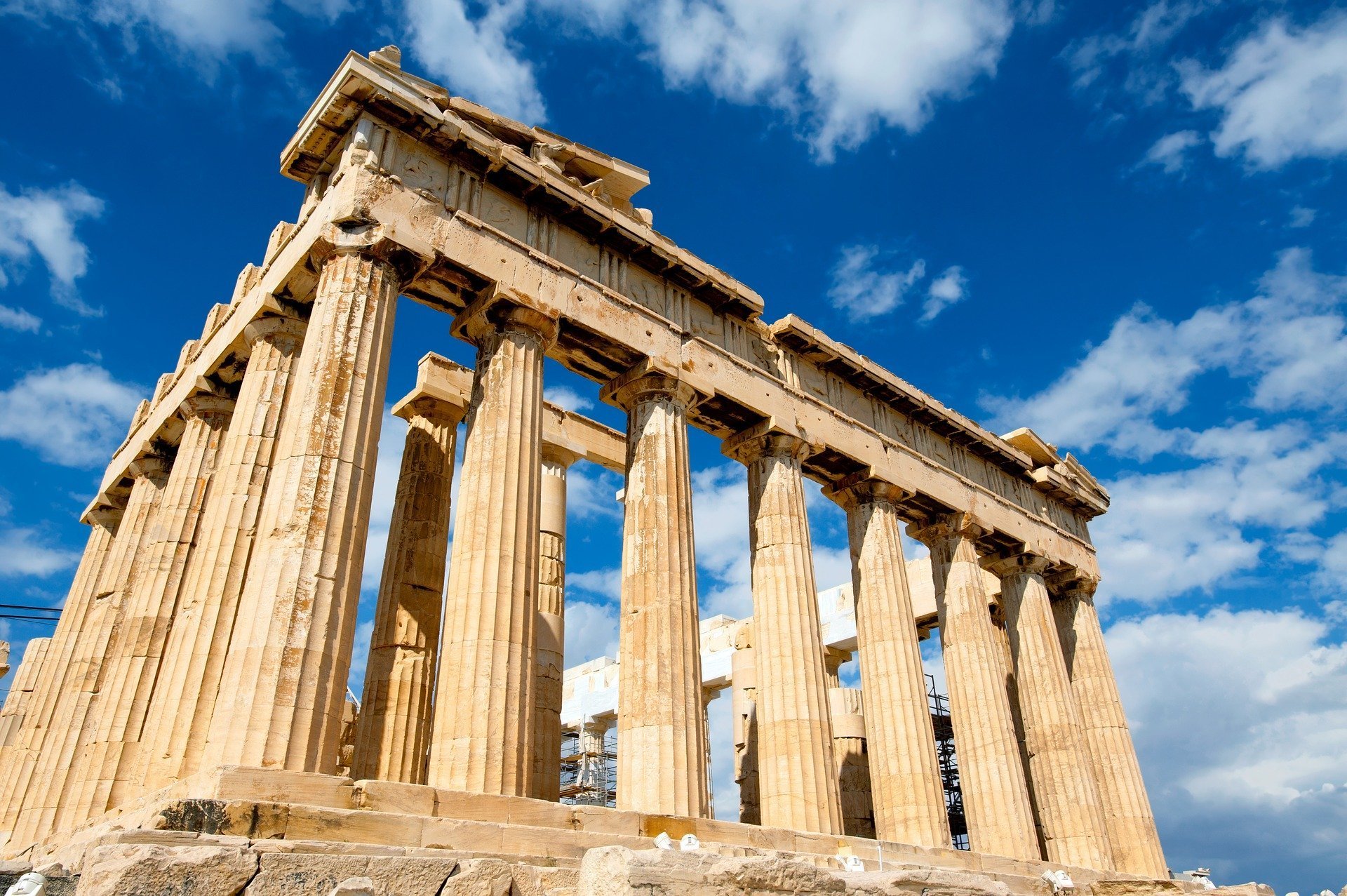 The Golden Age of Greece, also referred to as the Classical Period, took place in Greece in the 5th and 4th Centuries BC. This era started when the age of tyranny in Athens finished. Peisistratus, a  known tyrant, died in 528 BC. It took until 510 BC for Greek society to stabilize and begin to flourish once again. This was followed by the rule of Alexander the Great, which was a time of remarkable growth for the Greek people. The end of the Golden Age occurred when Alexander passed away in 323 BC. The Golden Age of Greece was one of the most important times in Greek history. It was a time of remarkable cultural growth, and this is what people most often think of when they picture this time period. Greek theater was invented during this time, and plays written by dramatists such as Aeschylus, Aristophanes, Euripides are still performed today. Other things, such as the Olympic Games were also popular during this time period. This is also when democracy was invented and the Athenian Parthenon was built. This is when the noted philosophers, Socrates and Aristotle, were alive. Socrates' method of questioning is still modeled today in today’s schools and universities. Aristotle was one of Socrates’ students who made important contributions to philosophy and intellectual thought. He was also one of Alexander the Great’s tutors when Alexander was a child. 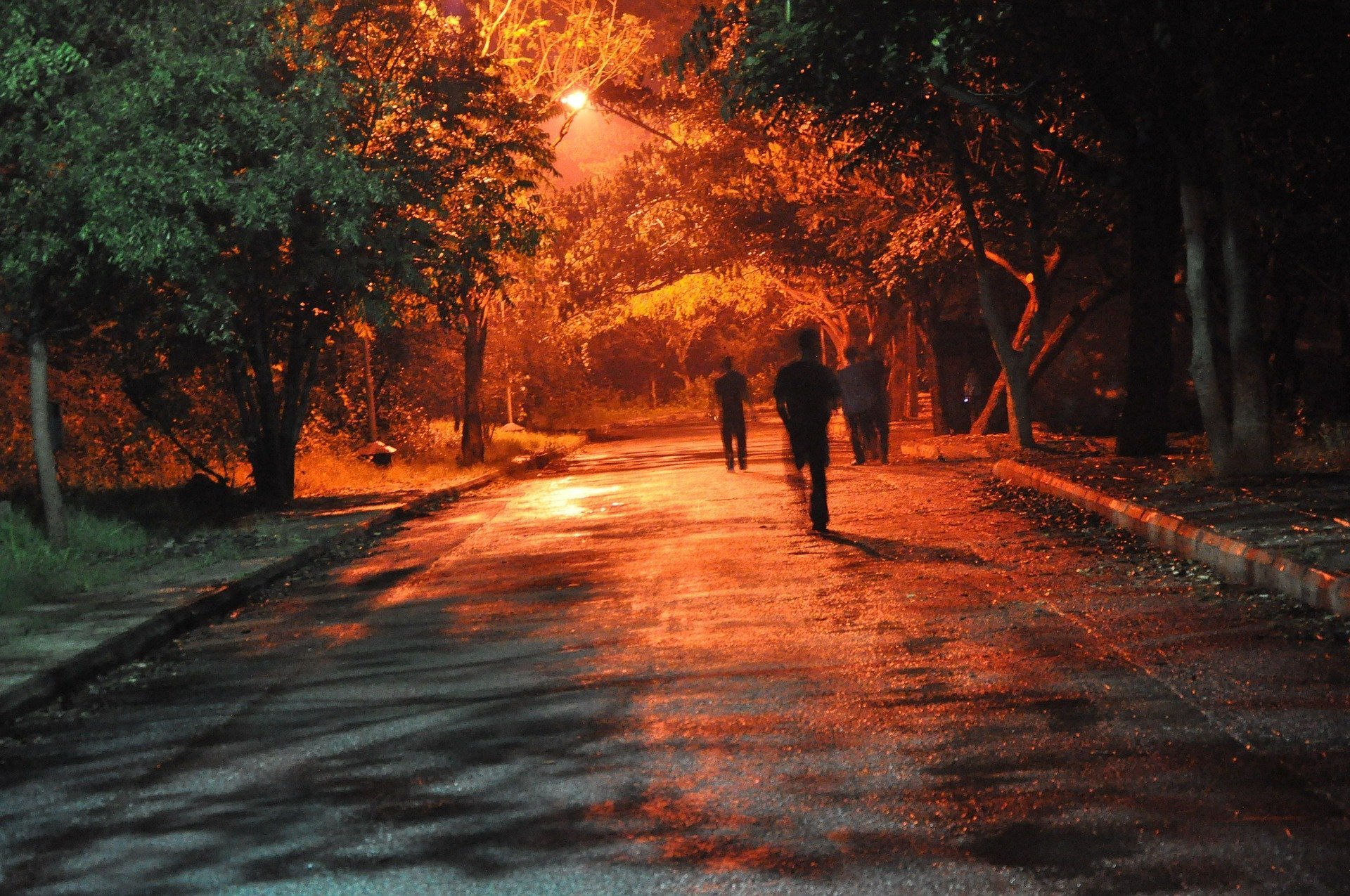 The Enlightenment was an intellectual and philosophical movement that dominated the world of ideas in Europe during the 17th to 19th centuries. The Enlightenment emerged out of a European intellectual and scholarly movement known as Renaissance humanism and was also preceded by the Scientific Revolution and the work of Francis Bacon. French historians traditionally date the Enlightenment from 1715 to 1789, from the death of Louis XIV of France until the outbreak of the French Revolution that ended the Ancien Regime. Philosophers and scientists of the period widely circulated their ideas through meetings at scientific academies, Masonic lodges, literary salons, coffeehouses, and in printed books, journals, and pamphlets. The ideas of the Enlightenment undermined the authority of the monarchy and the Catholic Church and paved the way for the political revolutions of the 18th and 19th centuries. A variety of 19th-century movements, including liberalism and neoclassicism, trace their intellectual heritage to the Enlightenment. The Enlightenment included a range of ideas centered on the sovereignty of reason and the evidence of the senses as the primary sources of knowledge and advanced ideals such as liberty, progress, toleration, fraternity, constitutional government, and separation of church and state. 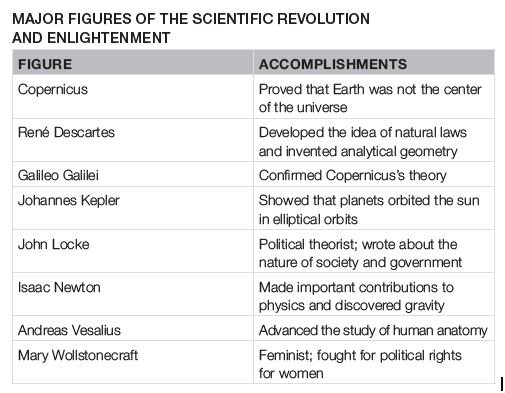 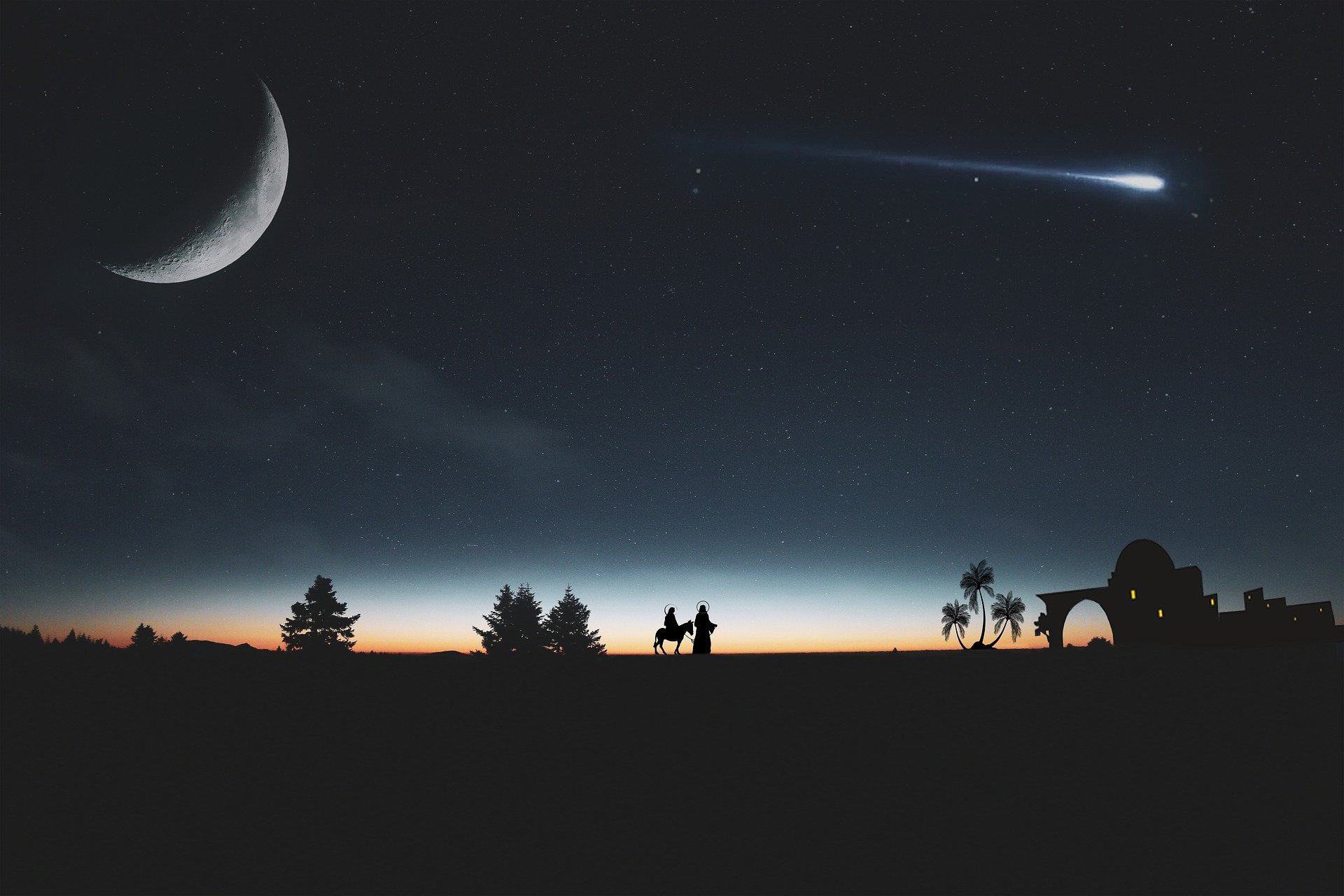 Whereas planetary orbits tend to be nearly circular, those of comets are elliptical`like stretched-out rubber bands.  The reappearance of a comet is proportional to the length of its orbit.  Halley's comet completes its trek approximately once every 75 years, whereas the lesser magnitude Enke comet makes its rounds in a mere 3.3 years.  Other comets, such as Hyakutake (1996), have such elongated orbits that they may pass through the solar system only once every thousand years or more.|There are three constituent parts of a comet: the nucleus, the coma, and the tail.  The nucleus of a comet is composed of primarily silicate dust particles embedded in ice; hence, the comet has been informally dubbed a "dirty snowball."  Surrounding the nucleus is a vaporous coma of dust and gases that extends for tens of thousands of miles.|When a comet approaches the sun, its tail develops rapidly.  Blasted by solar winds and light pressure, gases and dust are forced away from the coma, forming a forked tail.  A comet's tail always points away from the sun, somewhat analogous to long hair being blown back by a wind.  The tail increases in length as the comet approaches perihelion, its closest distance to the sun.  In the 1910 appearance of Halley's comet, the tail was calculated to be some 150 million miles in length.  As a comet retreats from the sun, its resplendent tail and glowing coma begin to wane, disappearing completely as the comet nears aphelion, the farthest point away from the sun in its long, elliptical journey. 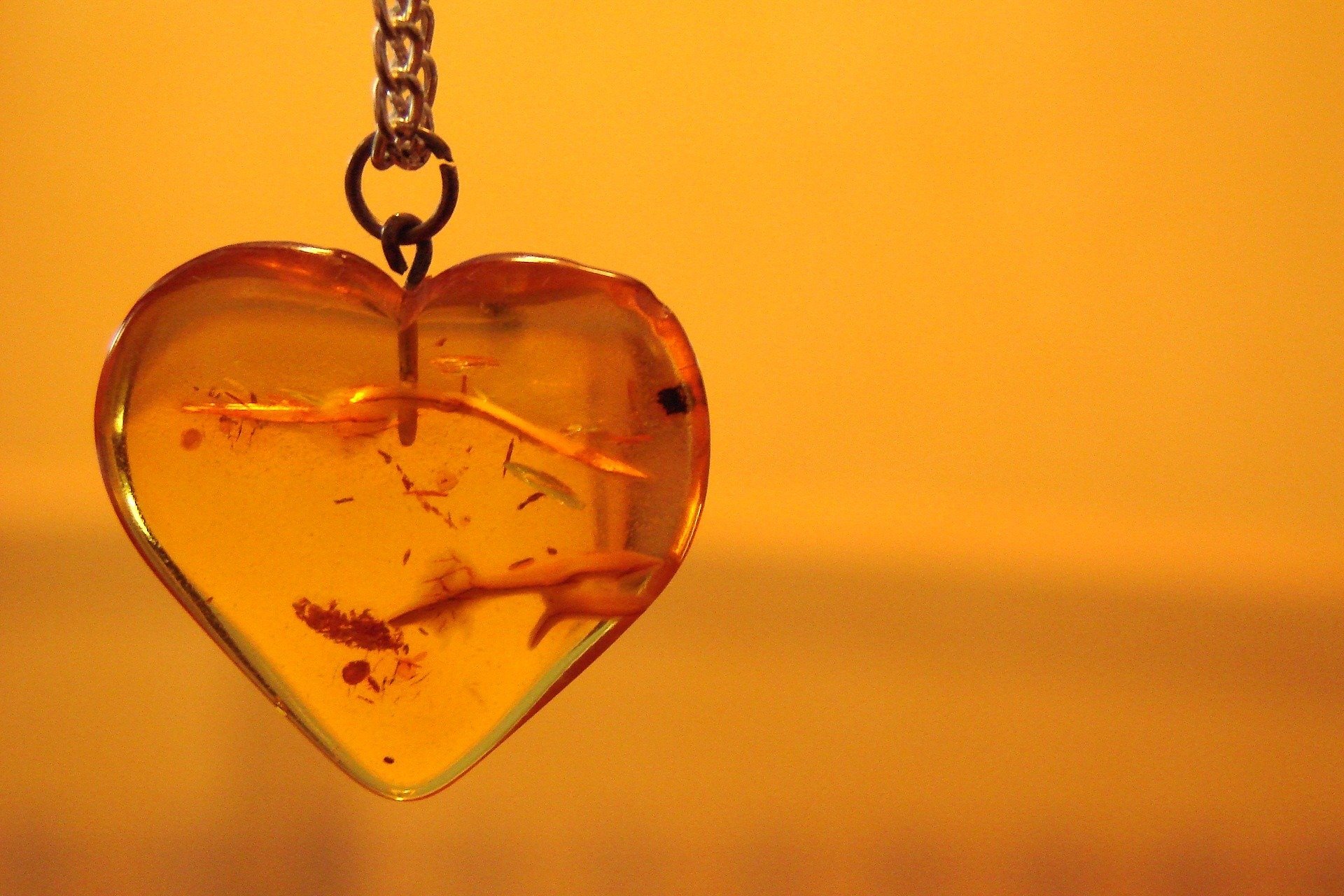 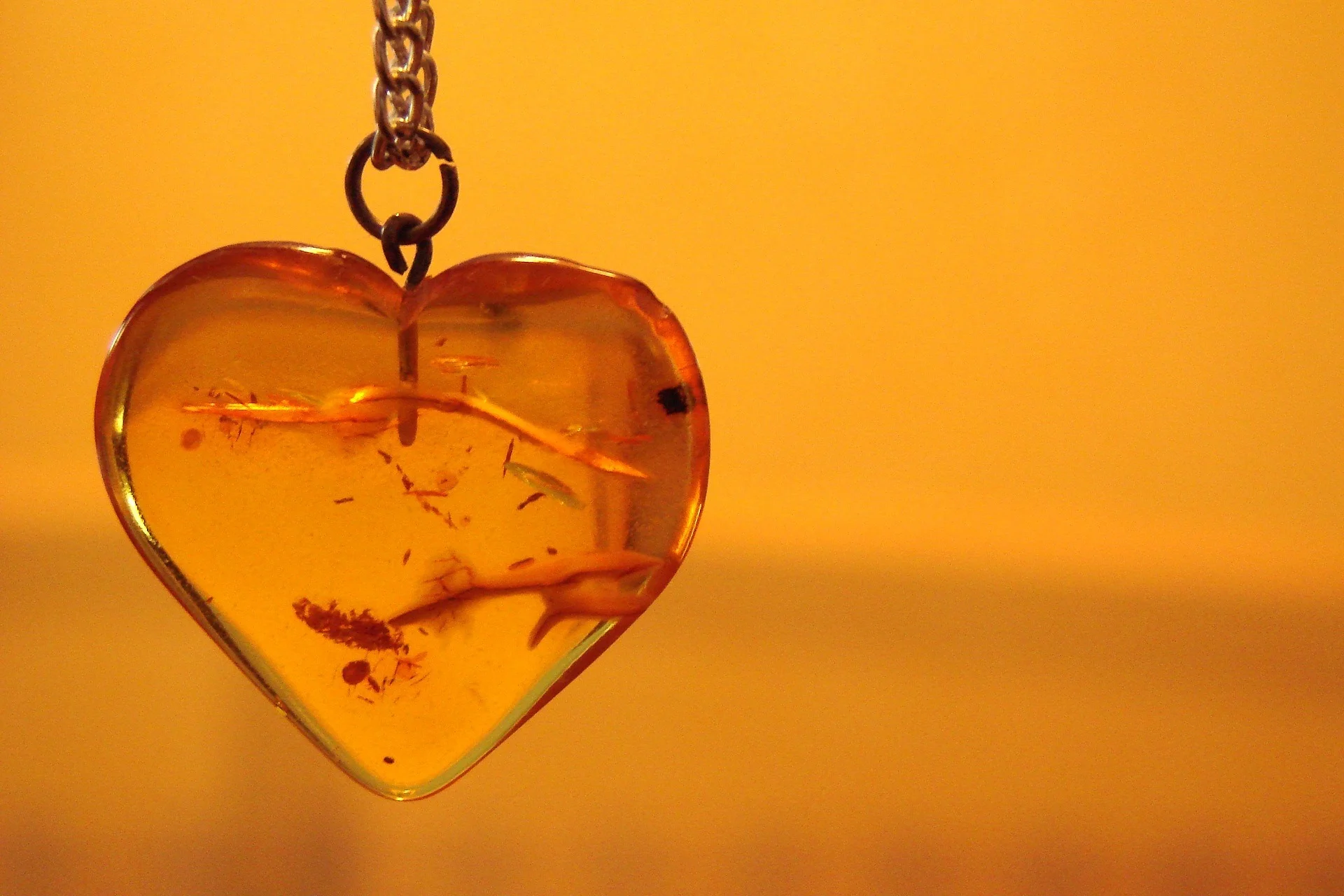 From ancient times, amber has had a strong allure, with its warm color, resinous feel, translucence, and curious flecks trapped beneath its surface.  As early as the Neolithic period, people were carving amber into figures and symbols which were worn as special charms or used for adornment.  Today, however, amber has attracted a new audience, scientists who are interested in studying the unusual flecks.  These tiny spots in amber are of interest to scientists because many are actually preserved organisms inside the amber.|Though often used in jewelry, amber is not a precious stone, a semi-precious stone, or even a mineral.  Instead, it is the fossilized resin, or gum, from trees.  It differs from other fossils, however, in that other fossils are generally mineral replacements of original structures, while amber is entirely organic; i.e., it is derived from living organisms.  In the millions of years that it takes for amber to form, its composition has stayed substantially the same as that of the resin that formed it.|Large deposits of amber in the Dominican Republic and Mexico are 25 to 30 million years old, and the eastern Baltic region boasts huge deposits of amber that are 15 million years older.  The extreme age of amber, coupled with its organic make-up, have caused amber to become the focus of recent scientific interest.  Modern technology has been used to determine that the tiny organisms caught in amber have been preserved to a remarkable degree due to the organic nature of the amber; soft tissue, cellular detail, and DNA of ancient organisms have all been preserved, providing information that cannot be obtained from other fossils of that age. 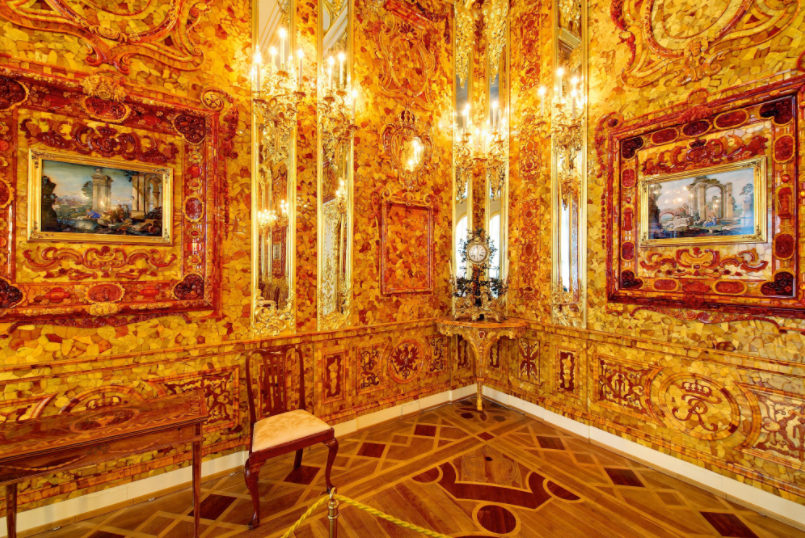 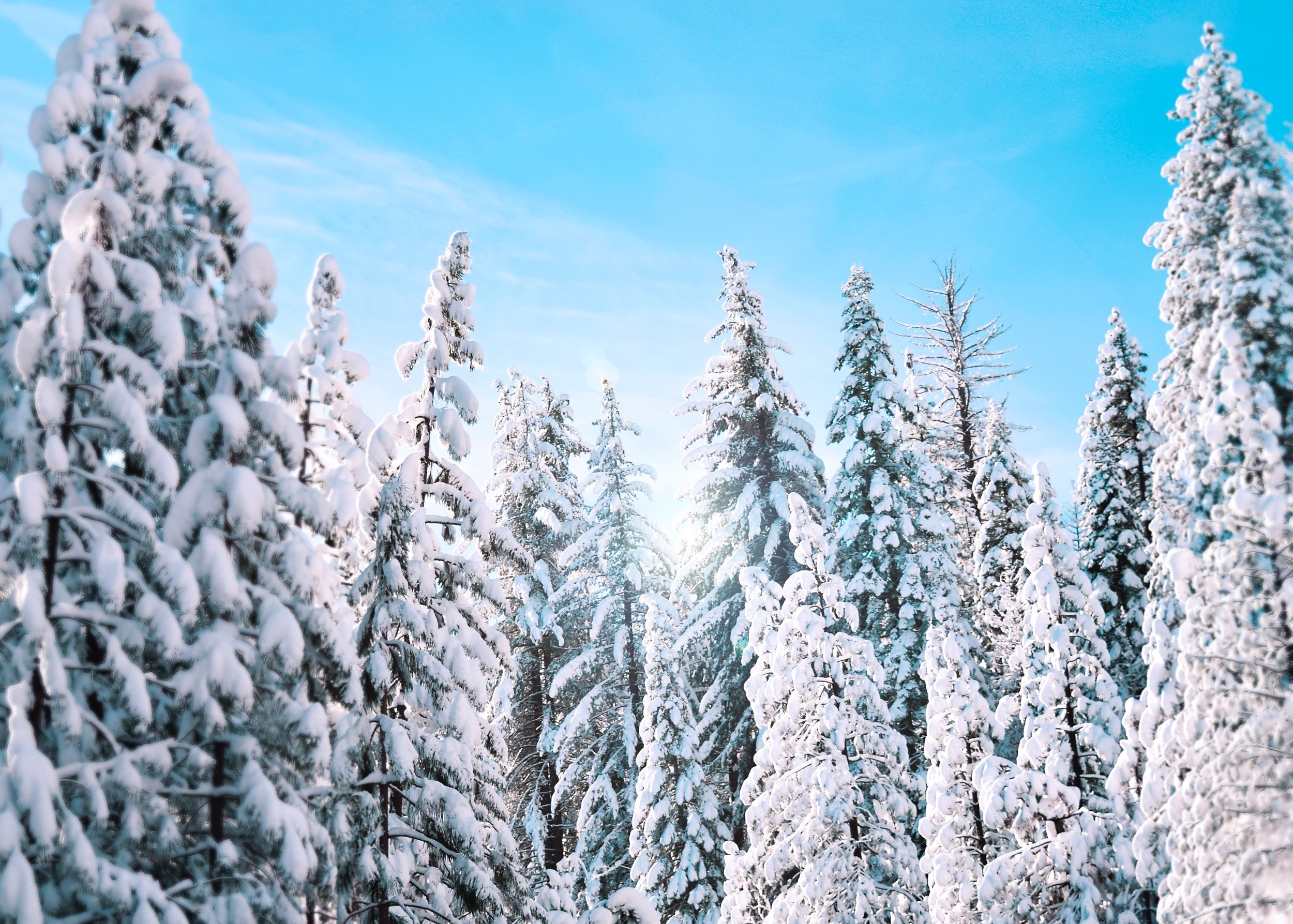 Snow is the precipitation of ice in the form of flakes, clusters, or crystals.  Snow crystals are formed in the atmosphere at freezing temperatures when water vapor is condensed to ice without passing through a liquid state.  These snow crystals often fall to the ground as individual units, but in warmer regions they clump together as they fall, creating snowflakes.  Almost 50 percent of rain was once snow that melted as it entered warmer temperatures on its way to earth. |The study of snow crystals has been going on for more than four centuries.  Many people have been intrigued by snow, and in the process of observing its forms and studying its formation, they have created a collection of its images. The first sketch was made in 1550 by Olaus Magnus, archbishop of Uppsala, and in 1635, the first scientific records were made by French philosopher, Rene Descartes.  Two centuries later, English meteorologist James Glaisher produced a drawing that is considered the most accurate image made before the development of photomicrography.  The pioneer in this advanced technology was Wilson Alwyn Bentley, a farmer in Jericho, Vermont.  He began his work in 1885, spending all of his free time outside in the cold taking pictures of snowflakes.  By the time of his death 40 years later, he had made 6,000 photos, half of which were later published. |From these studies and the resulting data, science has learned much about the snowflake.  Snowflakes are transparent, like glass, and vary in size from .02 inches to .50 inches in diameter.  Although an infinite number of snowflakes fall every year, no two have been found that are alike.  However, all natural snowflakes are six-sided and consist of flat-plated ice crystals.  These hexagonal clumps of ice create a winter wonderland in nearly every part of the world each year. 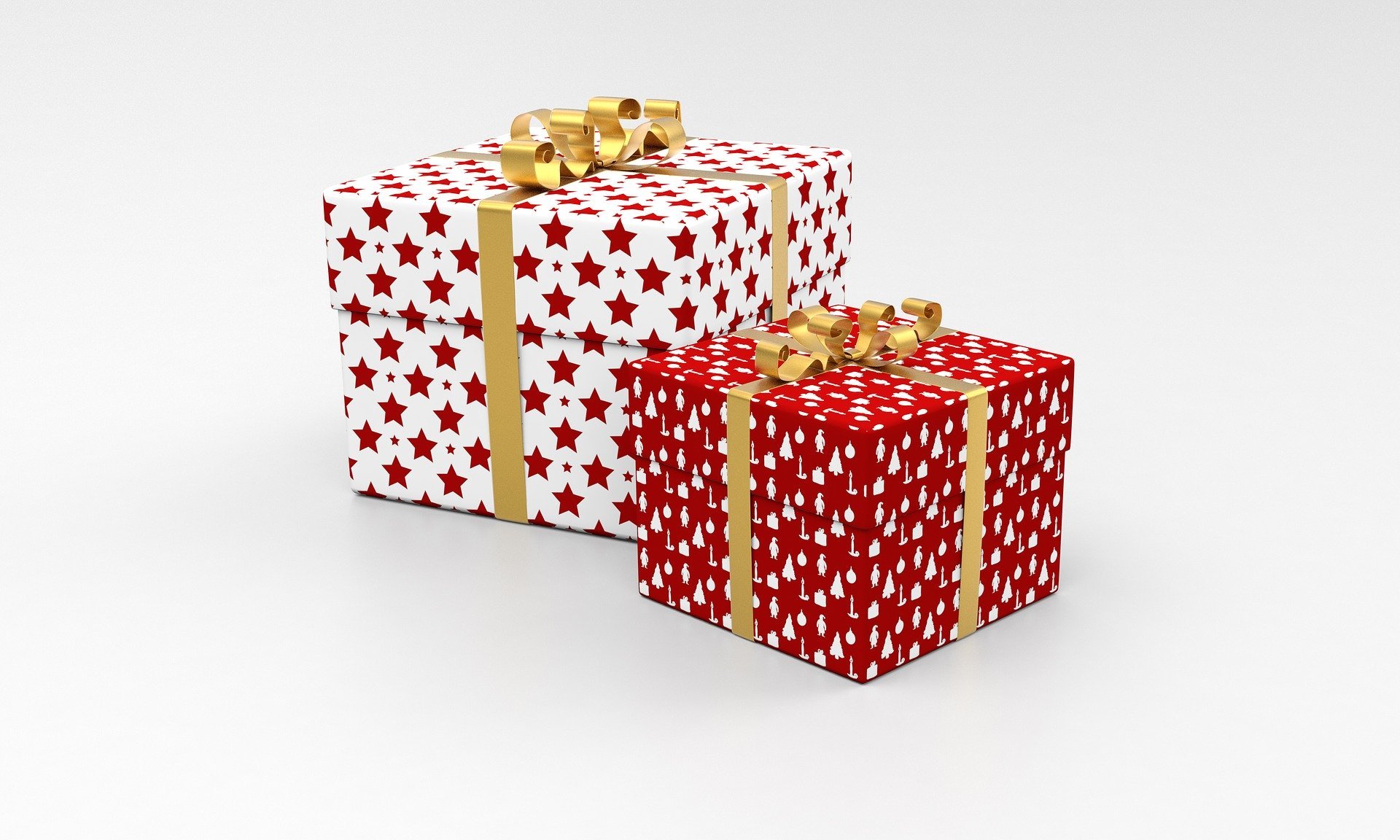 Every day, millions of shoppers search for the perfect gifts. They buy them for holidays, weddings, birthdays, anniversaries and myriad of other celebrations. Many people relish the opportunity to buy presents because they believe it offers a powerful means to build stronger bonds with their peers. However, many worry that their purchase will disappoint the recipients. Anthropologists believe gift-giving is a positive social. On the other hand, economists describe it as a waste of resources. According to them, people buy presents that recipients would not choose to buy or spend less money to purchase. This is not surprising to social psychologists either. Research has found that people struggle to take account of others’ perspectives. They equate how much they spend with how much with how much recipients will appreciate the gift. However this assumption may be unfounded. According to scientists, gift-givers signal their positive attitude and willingness to invest in their future through gift giving. Ergo, gift-givers believe that with expensive gifts they are sending stronger feelings. 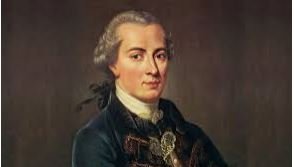 According to Kant, knowledge should not be seen as representing objects that exist independently of      our judgments. Such objects should not be construed as existing both out there in the world and in our minds behind sensory experience (as rationalists argue), nor as arising directly out of sensory experiences, which then get pieced together by ideas (as empiricists argue). For Kant, neither view concerns dimensions of consciousness, which are crucial for relating the conditions of human knowledge to ethical and moral issues. Human beings are not only able to attribute meaning and value to experience, but can discover that they themselves are the source of those meanings and values. Kant attributes this not only to reason but to imagination. Imagination, for Kant, makes it possible for human beings to discover that they are themselves sources of meanings and values, a discovery necessary for individual consciousness of freedom and for re-solving discrepancies between is and ought in society and history.